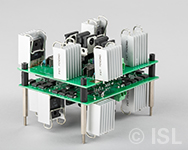 Hosted by the French-German Research Institute of Saint-Louis (ISL) in France, this year’s annual workshop of the ISP will focus on switch technologies for pulsed power applications. This may include

This workshop is intended to provide the possibility of networking within the pulsed power community and to support the scientific/technical exchange between scientists, representatives of industry and students. The frame of the workshop provides an opportunity for closer social and technical interactions than a large conference. The workshop will be accompanied by a lab tour of ISL labs (pulsed-power, railgun, clean room,.. ) and the annual member meeting of the ISP. The event is free of charge but a security clearance will be required to access the ISL. The time and date of the workshop have been chosen to allow participants to visit the cultural highlights of “Scheibenschlagen” (disk flinging) in Weil am Rhein on Sunday evening, the Morgenstraich (Monday 4 am) and the Guggemusic concerts (Tuesday evening) of the Carnival of Basel. Because the carnival attracts many tourists from all over the world, we recommend starting your travel preparations as soon as possible.

Please organize a Hotel room by yourself. ISL provides the following List of Hotels which are nearby the institute.

A limited number of rooms was reserved at the Hôtel Berlioz in Saint-Louis for a special rate of 80 € (incl. breakfast). Hotel Berlioz is located in walking distance to the ISL and the train station of Saint-Louis. For all of those who did reserve a room: Before February 15, changes can be made by contacting us via event@pulsed-power.org. After the registration is closed on February 14, changes have to be done at the Hotel directly. Be aware that cancellations are only possible until 2 days before the arrival date. After this, the full price might be charged.

The alemannic fasnacht ends on Sunday March 1 with the tradition of Scheibenschlagen (disk flinging). On the occasion of this event, large bonfires will be lit and glowing wooden disks are flung from a long hazelnut stick off a mountain side into the valley below. It starts around sunset and anybody can leave at any time. A meeting point and time will be provided to workshop participants in order to have a first get-together. All necessary means, warm food and drinks will be provided on-site by the organizers of the bon fires (i.e. local volunteer fire department). Weatherproof clothing is a requirement.

In the same night, the Carnival of Basel begins with the Morgestraich. At exactly 4 a.m. in the morning of March 2, all lights of the city center in Basel will be shut down by the electricity supplier. The only light remaining comes from the lanterns of the Cliques (marching musical groups). Each clique has a large Zugslaterne (parade lanterns) that are wheel-mounted or are carried by up to 4 people and each participant wears a head-mounted Kopflaternen (head lanterns). On the command "Morgestraich, vorwärts marsch!" ("Morgestraich, forward march!") from the drum majors, several thousand participants begin to march and play the same march, the "Morgestraich", with their instruments. The fasnacht of Basel ends 72 hours later with the Ändstraich. Many restaurants and bars in the old town open their doors and remain open for the complete 72 hours. Although the Morgenstraich is an unique event and cultural highlight, everybody should be aware that participation requires to take a bus or train between 2 and 3 o'clock in the morning. At the time beeing, we assume that workshop participants will organize their trip to Basel on their own. However, participation at the Morgenstraich should be indicated during the registration in order to allow further arrangements.

The carnival of Basel differs in many ways from the carnival in other area (i.e. cologne) and thus, was added to the UNESCO intangible cultural heritage list. That active participants wear very professional costumes and play music is the most obvious difference. Passive participants on the other hand do not wear costumes but are asked to support the active participants by buying a plaggedde (Fasnacht badge). They are sold by street vendors in different price categories (copper, silver, gold,..) between 9 CHF and 100 CHF. The old town is constantly filled by active participants individually moving around and playing music. Large parades (called Cortége) are taking place in the afternoons of each day. Tuesday evening, March 3, is all about the Gugge music bands. At 6.30 pm the "Sternenmarsch" begins – a long procession of Gugge music bands that converge from different directions (hence the name "star-shaped march) and make their way from the trade fair (Messe) via Clarastrasse to the market square (Marktplatz) or Barfüsserplatz. Large stages are erected there for the musicians to present their songs to the Carnival audience. We are planning to go with the interested workshop participants from Saint-Louis to Basel by public transport and walk the old town including the latern exhibition at the Münsterplatz before we settle in front of any of the stages to watch the Gugge music concerts.

Further impressions and information at https://www.basel.com/en/carnival-in-basel
Carnival of Basel on Wikipedia

The French-German Research Institute is situated at about 10 km of distance from the international EuroAirport Basel-Mulhouse. There are taxis at the French exit (do not take the exit to Switzerland!). There is also a shuttle bus every 30 or 15 minutes to Saint-Louis train station.

Coming by car from Germany via the Autobahn A5 Freiburg-Basel, leave the A5 at the last exit before the Swiss border, Weil am Rhein/ Hüningen towards France-Hüningen/Saint Louis. Coming from France via the Autoroute A35 Mulhouse-Basel, exit at Saint-Louis. Some navigation systems do not recognize "Rue du Général Cassagnou". In that case, use "Rue des Fleurs" as street name.

Hotel Berlioz is located in walking distance between the ISL and the train station.